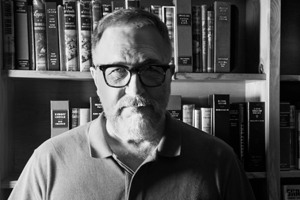 Kevin Royal Johnson founded Royal Books in 1996. He is originally from Arkansas, got an Engineering degree at Vanderbilt University, and after 15 years working for the government in DC, decided to move to Baltimore and do something more interesting. Royal Books originally operated on the fourth floor of a giant building that produced chemical sealant for underground pipes, and in 2002 made a permanent move to its present, more proper location on 25th Street.

Kevin has authored two books on the first edition sources for American film noir, The Dark Page (1940-1949) and The Dark Page II (1950-1965), both published by Oak Knoll Press. In 2012 he curated an exhibit of rare cinema-related photographs at the American Film Institute titled Behind the Fourth Wall: Actors and Directors on the Set 1926-2001.

His third book, The Celluloid Paper Trail: Identification and Description of Twentieth Century Film Scripts was published by Oak Knoll Press in late 2019.

In the past two decades Kevin has worked with the archives of John Cassavetes, George A. Romero, Beauford Delaney, Chris Offutt, Andrew Offutt, Glenn Branca, Vincent Peranio, and many others.

Kevin likes pimiento cheese sandwiches toasted on one side, a good burger, vinyl, and spending as much time as possible with his gal Nancy and their three highly untrained beagles Kirby, Twizzler, and Jolly. He enjoys watching movies and listening to music in a fashion that might be described as autistic, organizing information for purposes that remain mysterious, reading comics and comic strips published prior to 1979, studying film history, and avoiding film criticism. He resides happily on a quiet hill at the northwestern edge of Baltimore City, said by some to be unreachable unless you know the password. He does not want to go camping, avoids crowds, and depending on the topic either has little to say or can't stop talking. 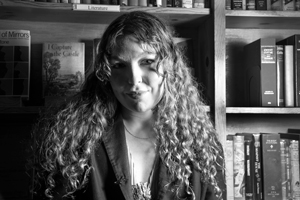 Ezra Warwick was born and raised in New Orleans, but soon found the pull of cooler, calmer climates irresistable. After graduating from Bard College in 2015 with a BA in Sociology, Ezra moved from upstate New York to midtown Baltimore, and now works for Royal Books, filling orders, cataloging and editing, managing consignments, assisting with appraisals and collections, attending book fairs, and attempting (occasionally successfully) to maintain a general sense of peace and order in the store. When not handling books, scripts, and other forms of rare paper, one may find Ezra taking opera lessons at Peabody Conservatory, spending too much money on vintage and antique clothing, cooking acadian food, tinkering with espresso machines, and watching movies by Peter Greenaway. Ezra lives with Ryan (husband) and Lula (chihuahua) in a small pink apartment in the neighborhood of Remington.

Tim Boniface was born and raised in Baltimore and attended the Maryland Institute College of Art where his focus was primarily on mixed media drawing. He has managed book stores and art supply stores and has been a proficient technical illustrator. Today he focuses his energies on cooking, reading, listening to any and all music, and watching far too much television with his sweetheart of the last 20 years, Chris. An avid film lover, his ideal movie would be Carl Theodore Dryer’s Ordet cast with the characters of Alex Cox’s Repo Man (he claims it would work). He’s quite elated to find himself immersed in the books, scripts and ephemera here at Royal Books and promises to lovingly prepare your orders as though they were his own.

Lenora Genovese has enjoyed playing with words and images as far back as she can remember. She began her career in graphic design as a typesetter and, keeping pace with the mercurial changes in the industry over the years, is now a Creative Cloud connoisseur. She is delighted to record by camera (or scanner) the eclectic stock at Royal Books and to place those images in both digital and print publications. Lenora was born in Virginia but scarcely a year later her family had moved to the Baltimore area. Since then she has lived overseas in seven different countries, always returning to her home base in Maryland. She and her husband Brad live in Linthicum with their adorable dog Rufus Valentino and their equally adorable kitties Baxter and Lulu. Her hobbies include cooking, birdwatching, traveling, photography, reading two books at a time, and all things Italian, especially language, food, music, and cinema. 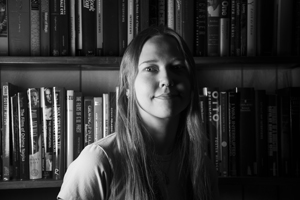 Elizabeth (Beth) Kopp was born and raised in Maryland and moved to Baltimore in 2020 to attend Goucher College as a transfer. She graduated with a degree in history in 2021 and has a love of women’s history, particularly focused on late Tsarist and early Soviet Russia. She currently lives in Remington with her 4 year old cat Georgia who loves to hang out while she reads romance novels. When not reading with her cat she enjoys trying out beginner knitting projects, binging reality television, and sometimes bouldering at the local climbing gym so long as her climbing buddy is in town. 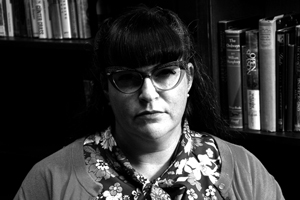 Bookkeeper
Jodi Feldman is originally from New Jersey, but most recently came to us from California.  She moved to Baltimore in 2016 to escape the never-ending hamster wheel that is life in Los Angeles. She discovered a gift for math and administrative arts while volunteering at Maximum RocknRoll in the 90s and parlayed those gifts into being the Punk Rock secretary. She then parlayed those gifts into being the kooky art-lady accountant that she is now. She currently resides in Hampden with two totally adorable cats and enjoys spending the weekends with her totally adorable life-partner, Andy.  She enjoys distractedly watching “things" with a book in one hand, usually with her glasses on top of her head. Her vision of a perfect film would be Bob Clark directing a Tarkovsky film or Tarkovsky directing a Bob Clark movie. She likes early mornings, rock n roll radio, reading in bed, going to sleep before 9, and driving with the windows open. She doesn’t sit in chairs properly and always falls asleep in the movie theater. She also really loves to swim.